the thing about that prince harry thing, aside from the bad taste, is that it's such a shit costume. it's just a crap arm band. 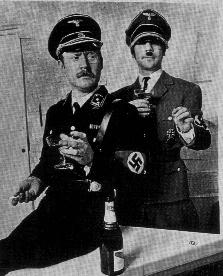 something magical happened today. an unexpected package was dropped into l's hands. it wasn't my eagerly anticipated (not than you can anticapte in any other way other than eagerly) playground law book; amazingly, it was a ephel duath t-shirt and a bunch of about thirty flyer/stickers. its not an official t-shirt, which is wierd, but it's nice and black and will look great next to my red one. so why me? i'd like to think that it was because they somehow found my address and posted it to me, actually it's those x-taster guys. while that was very nice of them, their viral marketing scams seem slightly off to me.


i've never really trawled through the B3ta message boards before, but a came across this today: