You know what I hate? Stations named after streets, and vice versa.

Take 'st James st station'. Aside from featuring the abbreviation 'st' three times for different words, it's a station named after the street named after st James. Here's an idea - just call it 'st James station'. Everyone will still know where it is.

The only thing I can think of to contradict this is Liverpool street, which would before confusingly called 'Liverpool', but that should be called after bishopsgate ot 'spital fields, or bedlam, anyway.

So yeah. Reclaim the street and station names!

So DID Prometheus kill ATMOM?

This post has massive spoilers about Prometheus and At The Mountains of Madness.

You probably haven't read ATMOM. But because I am good to you, and in the spirit of the old internet of blogging something and writing about it, rather than just tweeting a link to it, here is the Ladbroke/Richard Coyle (who also did last week's 'Shadow over Innsmouth') production:

So before you read this post, listen to that. It's only 2.5 hours, which is a lot less than it'll take to read the novella, which will distract you with the surprisingly tough, verbose language. Also, go to their bandcamp and gaze in wonder at the number of well-produced, free-streaming, excellent books, and maybe even buy some of them.

Guillermo del Toro was working on a movie of ATMOM. Loads of pre-production was happening, and then the studio said 'you can't do a multimillion dollar R rated film.' Then, along came prometheus, which was exactly that. It looked like maybe, if Scott could pull it off, then so could Del Toro; the time is exactly right for Lovecraft to spill over into the mainstream, even through the relatively cthulhu-free ATMOM.

Then Prometheus actually came out and Del Toro said: "Prometheus started filming a while ago- right at the time we were in preproduction on PACIFIC RIM. The title itself gave me pause - knowing that ALIEN was heavily influenced by Lovecraft and his novella.

This time, decades later with the budget and place Ridley Scott occupied, I assumed the Greek metaphor alluded at the creation aspects of the HPL book. I believe I am right and if so, as a fan, I am delighted to see a new RS science fiction film, but this will probably mark a long pause -if not the demise- of ATMOM."

When questioned further he added: "Same premise. Scenes that would be almost identical."

It's taken me a while, but after listening to ATMOM while ill in bed, and having chanced upon a free night to watch Prometheus, I feel in a position to make some sort of judgement as to whether or not the similarities between the two are too much to bare. If they are, of course, surely the people who own the rights to ATMOM should be in a position to sue for copyright infringement? 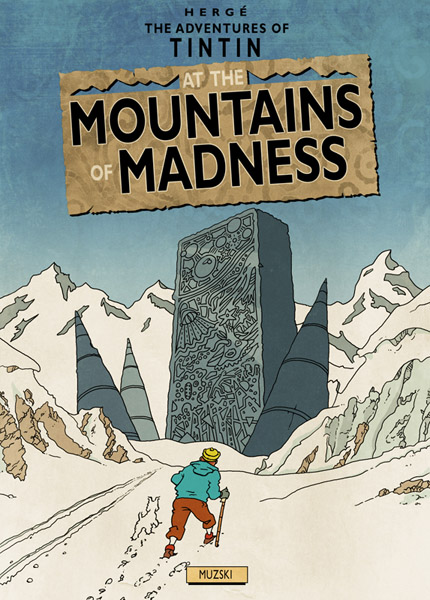 First then, a few notes on Prometheus, that I don't think I've seen addressed anywhere:

The cast, on paper, is excellent. But in the film, they're made useless by having to be 'characters' instead of acting. Everything about them is a straightforward, lazy approach to characterisation that relies on stereotypes to get us to 'know' the characters super fast. TBH, I was surprised this film clocked in at only two hours; given the tendency of big-box-office films by Jackson, Lucas, and Nolan &c. to be over two hours, I thought a little more time might be spent on more effective character development. e.g. why is Idris Elba having to put on an American accent? we have sleezy truckers too. I shouldn't complain, I just hate it when people needlessly have to fit a the pointless details of a scripted character.

When will film makers stop making prequels that look more advanced than the films ostensibly set after them?

Ancient civs with nothing to do with each other; such as the Sumerians, Mesopotamians, and Babylonians. Is it just me, or did they all live in the same square mile? Oh, and that star configuration: I'm pretty sure, that if you have the entire star map available to you, you will be able to find five stars that sit in that pattern *especially* if they are invisible to the naked eye.

This mission costs 1 trillion dollars. What's that worth in real terms? That might be nothing by 2093. Would a C14 reader work in space? Radiocarbon dating only works on earth because of the particular proportion of C14 created in the Ionosphere on this particular planet. Who's to say it would still apply on a different one?

At this point, on top of the 'dna match' controversy, and the 'let's give it a shot to convince the head that it's still alive' nonsense, it is enough to force the conclusion that this is not a sci-fi film. Alien never had any of this rubbish; it had just enough to get you into space, then no hand-wavey gadgets. This pulls out shortcut after shortcut and it just grates until you decide to stop caring about it and write off any plausability, so you then categorise it with Doctor Who instead of Alien.

So then they land on the planet and are faced with a design recycled from the original attempt to adapt dune:

It totally breaks the suspension of disbelief to see a recycled art asset like that. I mean, if Radiohead come on stage and started playing a 'brand new song' that incorporated a sample from a junked demo that everyone in the audience knew but had never had an official release... People would love it. But here, in terms of story telling, it kills it, because it shows up the laziness. You feel like you're getting the cast-offs from other projects.

Lastly, I've got one word for the film as a whole: scattershot. Every threat in this film is a different thing. We have the penis-snake, the zombie, the virus that kills the man so he has to be burned, the squid, the engineer. Every scene is a different creature and that's not good storytelling because you can't build up any suspense. It smacks of making things up as you go along with no end in sight (I'm looking at you, Lost-scriptwriter-man). The film feels like it was put together by a crew behaving like the characters in the film: running around chaotically with no aim, no structure, no one in charge, getting lost, and ultimately, crashing the vehicle into an alien space ship because they've ran out of other options.

If justice was done, this song would play over the credits of ATMOM. Click play and read on:

Stylistically, they are both about teams of academics going to the edges of known space and discovering that life on earth was created by beings from beyond. P achieves this with a great deal of faith, and not in the way that was intended; they assume *right from the start* that they are going to meet the aliens who created humans, on no evidence at all. This wild supposition turns out to be right because 'the DNA matches', luckily.

In another similarity, it turns out in both stories that the aliens were killed by their creations; the slave-race of shoggoths in ATMOM, and -whatever the hell was going on- in P.

In another twist, both the aliens turn out to be Men (capital to distinguish the gender from the race). But in different ways; ATMOM has the most exquisitely described monstrous creatures who attack the humans upon waking, but as the story progresses, are sympathised with more and more until the narrator declares that spiritually, they are human (decades before pk dick said 'human is'). On the other hand, P has aliens that beneath the helmets are clearly human, before even the DNA match, but who attack the humans upon waking. 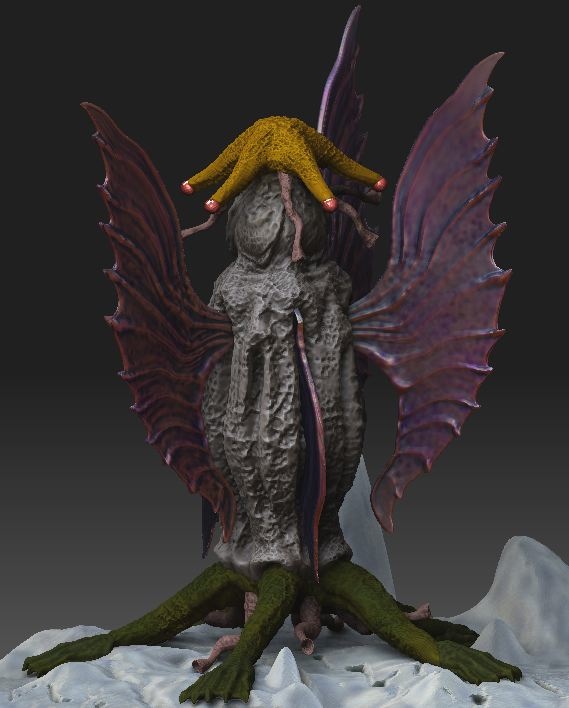 Here's my bugbear, though. Writing in the early 20th Century, Lovecraft's story placed a mythical creation of the earth in keeping with the current science of the time (and even now) by claiming his Elder Things created the essence of life on earth, and then let it evolve, perhaps with the occasional 'hello'. Scott, on the other hand, either has his aliens riding rough-shod over evolution and creating humans sometime fairly recently, or creating life way back in time which then somehow, inevitably turns out to be exactly like the engineers. Or maybe you think they seeded the earth with life, then turned up every now and again to push life in the right direction, but then you're wrong, because there's no hint of that and the movie you're thinking of is called '2001'.

So why is a story from 100 years ago more respectful of science than a story from this year? The only piece of sci-fi in ATMOM is a new boring device (that's not even a pun). Even more so, Lovecraft used the story as an opportunity to de-mythologise his world, so that rather than gods, Cthulhu and his ilk were just aliens beyond ken. On the other hand, P is full of made-up crap and careless innacuracies.

So yeah, Prometheus is just At The Mountains of Madness, but IN SPACE; minus everything that was good about ATMOM and plus a load of crap, but still, the story line is ATMOM in all the places that matters (ok, I'll admit it, I thought David was quite good. And I have to say, I loved the panicky menu navigation on the operation machine). 'Cause even if you did adapt ATMOM, you'd have to change the story telling techniques in some ways so that it's not all about two guys reading some incredibly detailed statues for half an hour. I mean to say, not a lot really happens in ATMOM. The narrator is only alive at the end because he always misses all the action and tells you what has happened before they got there; the whole story builds up to a single *glimpse* of a living monster.

But you know what, I'd just be happy if they released a book of the unused concept art for GDT's ATMOM. That would be easily better than waiting for the film to never come out.