It occurs to me that Tolkien is a massive... Nazi. Let me explain why I use that word instead of 'fascist'. because he's not a fascist, but there are uncomfortable notes in the books that are exacerbated in the films. Okay, maybe an inverse-Nazi. The films have hatred poured down on humans, in comparison to the eldar siblings. Aragorn, a numenorean (the wise, long-lived homo superiors) , is told he can't leave the throne of humanity to themselves by gandalf (himself not a human but a Maiar, think along the lines of arch-angels) , as they will screw the world up. He can't marry Eowyn, because she is a low-born normal human, not of his bloodline. Instead, he is more along the lines of the Elf Arwen (and yes, i get the names confused too, thank you tolkien with your saurons and sarumans and your morgoths and youir gothmogs). Of course, the humans still make great cannon-fodder for fighting evil beings and corrupted humans.

It's so cruel to us humans, not only to be so hard on us about our failings, our corruptibility, and our weaknesses, and not only to create the 'perfect' race of elves - the first-born children of Iluvatar (read any freudian subtext here that you will, beraing in mind JRR was himself the eldest sibling to another child), but create a race of 'blessed' humans who have long lives, wisdom and strength. There's an air of defeatism and self-loathing about it. This is closer to Nazism that Nietzsche got, because his concept of the uber-mensch was a personal one, not a race-based one (if i've absorbed the cultural information accurately). Lord of the Rings is really about the hand over of power from the elves to the humans; the elves have their one last attempt to kick evil out of the world, then leave it to the humans, who coudln't even manage that on their own. That the film's hatred of humans is so deep-rooted is another reason I can't understand it's popularity. It's like legions of people around the world went to the cinema to be told that they're useless and untrustworthy.

But to be honest, while I don't like the comparison to a fictional ideal race, I  broadly agree that humans are useless. Consider the 'boot room' anecdote from Ian McEwan's 'Solar'; a room of the brightest minds from around the world, investigating the climate-change damage to the Arctic, can't even organise a tidy boot room (said to be directly inspired by McEwan's own experience of the same). Humanity is utterly doomed.

I don't want to get all Chris Packham and say 'everything was great until we turned up, then we ruined everything'; I think that's an oversimplification. I just wonder, you know..? I think there's pretty fundamental things we need to sort out before we go any further. We're in serious trouble as a planet, and making comparisons between us and some fictional race he pulled out his germanic-mythalogical arse is not going to help.

So i just finished a spacechem level that has taken me at least 6 months; as in, i got stuck on it, and have up. Occasionally I came back to it, only to be frustrated from being out of the loops.

Then I was in the bath tonigt, and the answer finally broke in my head.

The problem was a level where you're given h2o, and have to output h2, o2, and plutonium. The problem is, plutonium has an atomic weight of 94, and oxygen has an atomic weight of 8. 8 doesn't go into 94, which only has two factors both prime: 2 and 47. I couldn't figure out how to take these two atoms, h and o, into a one huge nucleus (the level also has a fairly tight limit on the number of factories you can build to transform your matter).

So there in the bath it occurred to me, I would just have to glue 94 hydrogen atoms together. Except that would take too much space. So, glue two h together to give an he, and stick 47 of them together, which you can just about get away with in the space of one factory.

It occurs to me that if weren't a maths teacher, with a good knowledge of prime factors, would this have been easier or harder?

On the Rings of Power and the Third Age

As I've been sketching out this post, it seems to be swelling to about 5 interconnected themes (much like the music of the valar) So this might turn into a bit of a mega post. I'll try to breakit up with some nice pictures.

So while my family was away for two weeks, I tried to do some recording. Honestly I did.

But I got confused, and I decided a better use of my time would be to watch the extended version of The Lord of the Rings (I will be referring to is as a single film throughout, since none of the chapters stand alone as independent films). Aside from anything else, this has got to be the gayest film ever. Never mind from all the macho posturing, camping and scouting for boys, the incredible lack of female characters, which has all been discussed elsewhere, consider lines from the film like this:
"all his thought is bent on it"
"his gaze is distracted"
See? it's written into the dialogue. Sauron's orcs are his gays, and his thought is bent.

For a film with barely three speaking female characters in 12 hours, I'm surprised that it manages to just scrape through the Bechedel test based on a conversation between Eowyn and a girl called Freda who rode into town with her brother. I can't remember her name from the film, but apparently it is in there. The film uses utterly retrograde shorthands for evil, such as race and disfigurement. I won't dwell on these points since they're made well across the internet, although I disagree that This was a missed opportunity to use little people actors, because I find that utterly patronising when every film is an opportunity to use little people. I'm glad this didn't turn out to be like willow (although it's painfully obvious when they do use little people stand-ins, whenever a hobbit is walking away from the camera next to a human).

I know the script a lot better than I thought I did. I found myself quoting along lines in a 12-hour film I've only ever seen once, of a huge book I've only ever read once. Clearly it all had an impact. But I'm still at an absolute loss as to what I think of these films.

Let me explain (wtf does 'I' get capitalised, but not 'me'?). When I saw the films, when they first came out, I could tell they were fairly faithful adaptations, as they'd have to be for such a popular book. That's what reassures me, but also confuses me. I find it hard to understand how it's so popular; the 6th highest grossing film series of all time. I can understand that Harry Potter films top that list, because Harry Potter is dumb. But how can something I like - something good - be so popular? Watching the films, I found them genuinely moving (mostly the relationship between sam and frodo), and genuinely funny (Gimli), and I know that I like it, but honestly, is it any good? or both to my tastes, and popular? It doesn't make sense to me that a large proportion of people would be able to emotionally engage with characters in a fantasy world. Like, a total fantasy world, not like harry potter or james bond - fantasy worlds just beneath the skin of our own.

For instance, I found myself playing 'cast-a-long-a-lord-of-the-rings' - you know, guessing what spells are being silently cast throughout the film by the characters. Gandalf worldessly casts push, Arwen dramatically casts flood and we are left in with no ambiguity to the magic nature of the wave that sweeps away, the Witch-King of Angmar casts staff break. But mostly I found the explicit magic in the film a little disappointing; Saruman casting a fireball at Gandalf just makes you wonder why that stuff doesn't happen more often. in the Silmarillion, magic is like oxygen; most non-human characters just live and breathe it unconsciously. I've written about this before.

I found I couldn't play one of my other hobbies - the act-change drinking game. I've become really good at spotting the change of acts in films, and often it's right on the button of 30 minutes and hour. just watch the time display next time there's the end of a big scene or a tonal shift in a film you're watching. Great fun, but not possible with a 12-hour film. The rambling self-importance of LOTR is another reason I find it hard to believe it's popular. It's really the opposite to star wars which sets itself up as a fun adventure filled with peril. Humour works perfectly in the star wars universe, but it feels a little out of place in the otherwise ultra-serious world of LOTR. Maybe it's because of the chopping up of the source material into bits that don't fit. Maybe, I don't know.

Also, as a side note, I think the term 'live action' needs to be really, really well defined now. Live Action should mean no computer generation at all, not merely 'featuring real humans sometimes'. Any use of green screen or cgi stops the film from being live action, it just means that contains some live action.

And DM OF THE RINGS is utterly genius. I say that as part of a rather unique group of people who a) love roleplaying and b) love LOTR and c) love affectionately taking the piss out of things we love. 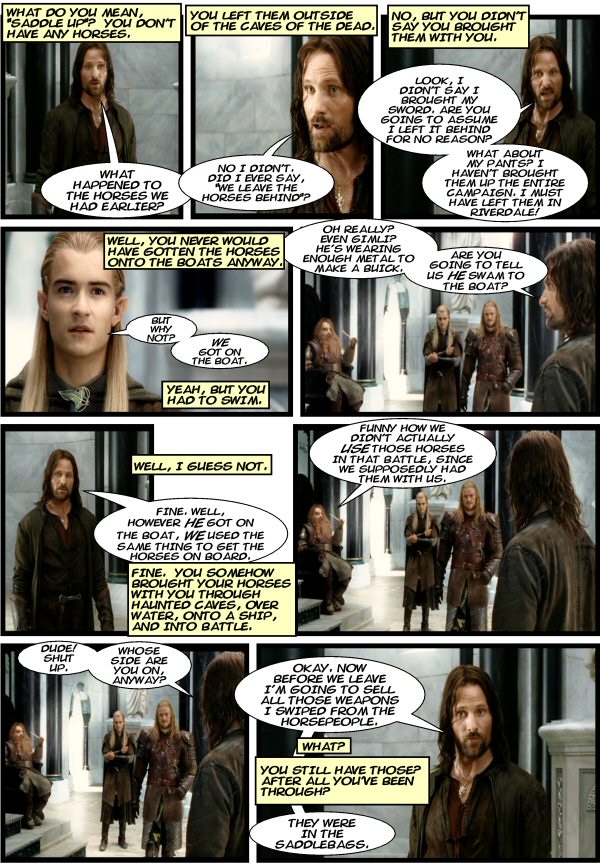 While you might say 'surely everyone who love RPGS loves LOTR, and might be broadly right, the specificness of the humour in DMOTR is pretty niche. While the concept is good, the execution is simply brilliant; How the author manages to make the Tolkien's narrative decisions into the gamers' or the masters' errors is brilliant. take this example.

Hmmm. can't help notice that the last four posts i've done are all 'this piece of culture sucks in all these ways but I still really like it, which just goes to show how good I am.'
Posted by Unknown at 3/03/2012 10:04:00 am No comments: Links to this post