I'm quite anally retentive about key changes. I don't like them for their own sake. If i have two pieces in different keys with similar harmonies, I usually try to align the sections by putting them into the same key.

This being a post-prog album, you can take it as a given that I want to use severely down-tuned guitars where possible. But transitioning from G# to Gminor follows the melody of the G# section; while modulating from G# major to D minor is a horrendous leap, both in terms of distance and harmonics. It's a key-change across a tritone, and while metal is all about tritones (the two notes used in 'black sabbath' from the album 'black sabbath' by the band 'black sabbath' are a tritone, which pretty much define the genre), that key-change would be a jarring non-sequitur.

I was fiddling around and realised that the key of the G# section, is actually Eb. It resolves to this very briefly in the middle of what one might call the 'chorus' of this section, in a sequence of simple, in-key major chords. Although the verse plays around in a scale of G# major with an augmented fourth (a 'lydian' scale), this makes sense come the chorus as the resolution shows that it wasn't in G#, it was in Eb all along; but it doesn't show its hand like this very often.

So then I realised that finally resolving the piece to Eb, then falling down to D minor (a semitone below), actually really nicely mirrors the G# major falling onto the G minor below that makes up most of the verse of this section, and this would be a really canny way to make the key change work.

maybe... too neat. Maybe too well worked. We'll see what sounds best in the long run.

With this kind of progress, don't expect this album to be finished any time soon. 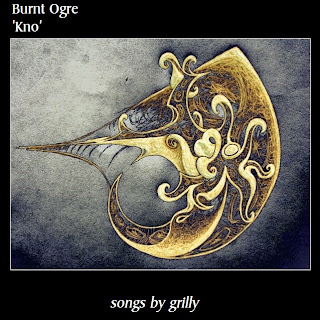