blimey, i've not blogged my great new mixtape. it's my favourite one so far too - here's the mp3 for hoarders, and here's the stream, courtesy of mixcloud.com

5 - Insight To Violence by Dj Gallowslutt on Mixcloud

i saw cats in paris on friday, they were brilliant and i danced like a dick on my own.

Too Many Colours | Cats In Paris by catsinparis

this is an idea i've had for a while, inspired by the insipid torrent of west-end musicals based on increasingly scrape-worthy bands. the challenge: can i write a plot outline for a musical based on a random artist from my collection.

so i hit random and off we go (doing it this way ensures it's weighted by how many tracks of theirs i have), and the dart hits... Nick Drake.

well this should be easy enough...


'Lilac Time: a musical based on the songs of Nick Drake'
Joey is a poor boy who lives in a shed. He's in love with hazy jane but doesn't know how to woo her so he goes to see the river man, and tell him all he can. the river tells joey about the plan for lilac time, so at the chime of a city clock, joey plants a fruit tree. this summons the things behind the sun which fly down and give him a free ride along the way to blue through the saturday sun. it takes three hours. then the day is done and it's sunday. in the blue, joey finds a way to read people's minds so discovers the thoughts of mary jane and how he can find fame. unfortunately the fruit tree withers, and the things behind the sun vanish, leaving joey plummeting towards the ground, where he splats into a road. the end.
Posted by Unknown at 6/13/2010 05:18:00 pm No comments: Links to this post

when i was mixing K, i got out the old soundcard to try to play it through with autocross fade on (basically plugging more memory into the machine, like in the old days). it didn't work, for some reason the crossfade got munged up and i had to redo it by hand, but what it did tell me is that plugging the headphone socket into the line in socket is a valid method of getting around the fact that you can't just hit record and expect it to record the noise it's making.

what it also told me was that my little soundcard still worked (just the line out doesn't) so i stuck my mic into it and recorded a couple of acoustic things i've been playing around with. both open tuned - first in d major, second in d minor. hope you enjoy them.

i wrote about a track from the code 666 compilation 'better undead than alive 2' which sent my mind reeling. there's something about extreme music that puts your brain into a different state, i swear.

there's another track on the album which gave me quite a reaction. i'm posting it here, because it's just too 'big' for a mixtape. i'm not going to write much about it - you simply have to hear it, i'm sure you'll have the same reaction i did.


i've not heard such a serious genre splicing since sparks' 'dick around', although the two songs are nothing like each other.

i implore you to buy the record, which i hope justifies this infringement - sometimes the only way to tell you is to show you.
Posted by Unknown at 6/08/2010 04:28:00 pm No comments: Links to this post

not as in kula shakur, but as in justin k. broadrick, who features on this mix twice, and death cube k, who also sticks his beak in. justin started out in napalm death, has played in all sorts of bands, including scorn and godflesh, and will be working with alan moore in some way soon. i didn't end up putting any scorn tracks on, because they didn't fit in the mix, and that's more important than sticking to a theme regardless of the flow. but it's pretty much built around the two broadrick tracks, colony collapse and pulp. there's a definite theme there. pulp is a peel session track which came up on random on the tube, it's brutally forthright even though it seems to say not very much.

this mix isn't for everyone. it's pretty brutal, and slow. it's a weird one. it's music that's like music that people have told me is a bit how you feel on the drug K - a sort-of-coincidence. it features with a pallette cleansing gorky's radio 1 session track. enjoy, if you can.

4 - K by Dj Gallowslutt on Mixcloud

with this in mind, what can i add to the 'what i miss about doom' discussion?
i was playing through knee deep in the dead recently, aware that almost the entire episode was written by john romero. i started to notice just how much of the level design was bonus content.

here's the first level, and the route you need to take to finish it: 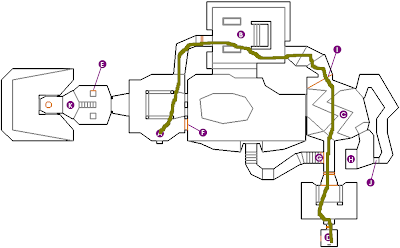 it's fairly linear, as you'd expect from an intro level.

the next three are big levels compared to the first, but full of extraeneous space: 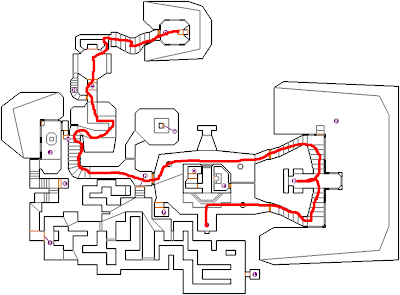 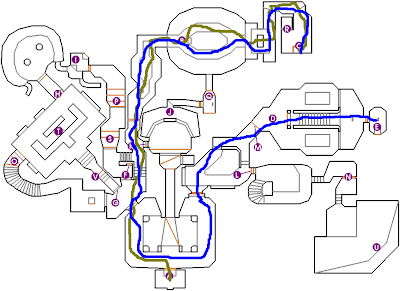 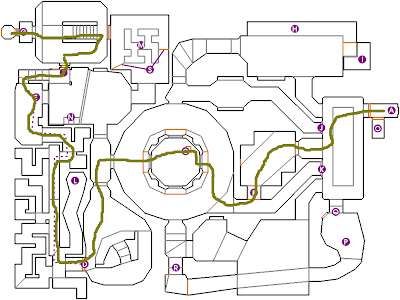 in each case, at least half the level is surplus/bonus material. is it there to confuse the player, like a labyrinth? is it there to reward the explorative player with unique experiences? or is it just there because in each case, playing the game is in itself a fun activity, and is a reward in itself? i imagine it's a mix - some players will go for speed run routes, some will try to clear out every level of monsters. the game doesn't reward you for this - it just tells you what you've achieved. the player creates the reward. it must be a mixture - some sections are undeniably labyrinthine, and of course the player won't know which route to take on the first playthrough, and won't have an optimum route worked out until many, many play throughs. i know i would go all the way through the maze sections, going down every dead end, on repeat playthroughs, just for the experience. it was in itself fun.

the next three levels (plus the bonus level - found, again, by exploring in level 3) are about as large, but in each case, need to be explored just to be completed. a route through each level takes in every nook and cranny of each level. the initial levels prepare you for this move, by having all that space but just not using it. levels 5, 6, 7, and 9 use the hub structure that doom levels are more famous for - basically involving a lot of picking up key cards and doubling back through a large central area, that hit its peak in quake 2 and certain sections of half life, before being superceded by the rest of half life.

as an illustration, here's level 5: 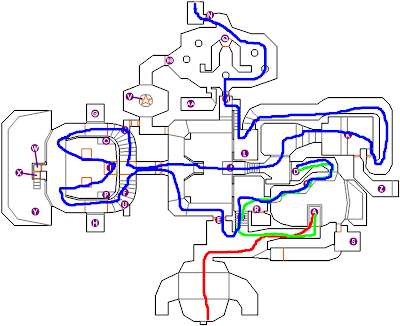 a jaunt through the level takes you everywhere. it's worth bearing in mind romero was an rpg creature at the time. the first few levels smell to me of the optional sidequests you find in rpgs, that further your character but not your overall mission. the second half of the episode merely builds on top that these sections are no longer optional, but necessary to complete your mission (apart from the secret areas).

i don't know what we can learn from this. it sort of contradicts the idea that doom level design was all about abstraction - these areas don't do anything in the game, so your brain is tricked into thinking they must be *for* something. this runs alongside the argument that fake doors in games are ok, because it's better than spending all that time prowling through empty rooms with no lockpicks in; so when something in a game is actually for something, to the extent of being useless in game, it should be left out. as i said i don't know. i think i just miss non-linear levels.

ammendum:
i played through the doom press release beta and recommend you do the same.
the most fascinating change, as trilobite point out, is the removal of points scoring items, and the replacement of these with armour and health bonuses. this move further severs ties with previous games' 'coin collecting' ideals; the only things to collect here are things which benefit you, albeit in a tiny way. armour and health fragments were librally littered around the levels, and exactly like coins, they serve as a reverse-breadcrumb-trail, letting you know (if you're lost) if you've already been in an area. they give you the joy of collecting with the little bleep and screen flash, but directly benefit you. also the infant joy i had of trying to work out the optimum traversal path through a field of bonus items...

ammendum 2:
i latterly realise that these levels might well have been go-everywhere missions at first, but were simplified in order to make the first few levels less challenging by simplifying the layout of the items, but keeping the layout the same (since they're great levels). does that undermine everything i said above? i dunno.
Posted by Unknown at 6/03/2010 04:29:00 pm No comments: Links to this post