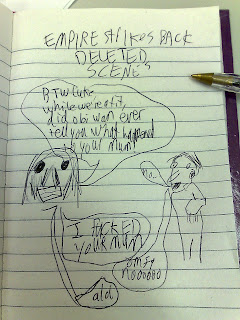 What language do pulp fansites use to control their pop up windows?

i'm skipping ahead now - i honestly do intend to blog every week between august and now - to this weekend just gone. it has been in some respects monumental.
after work on friday, i came home via the cafe that sells half price sandwiches after 5. i then jacked into quake and the internet until andrew arrived, in his car, with his mobile studio. we said hello then unpacked his assortment of flight cases, boxes of wires, rucksack, plate of pasta, mixer and laptop, and then he went straight off for dinner with jo. Then i went out to see euros childs with ian and his lovely mate john. don't worry, this will pick up soon. because it was part of concrete and glass, an urban festival, i'd missed several other bands and only just arrived in time for euros himself. being part of an urban festival also meant it was full of people who weren't really bothered, probably because they were only there because tv on the radio was full. i went up to the front of the gig to find a four foot gap between the stage and the audience - a terrible sign. alan tan lun wasn't in the band, which is tragic, and the new material was a mixed bag. but some was great. i could have stayed - i'd paid 8 quid to get in - but ian and john were leaving and andy and jo were some way off so i followed them out. we walked past the queue for tv on the radio, which was mega long - what kind of an idiot would join the back of something like that? you're not getting in - and i left them at the door to the james holden venue. i went in search of cash, picking up a somosa sandwich and a coffee on the way; but the free cash machine was closed. i wandered on, in the direction of liverpool street, and got a call from jo that they were now finally in shoreditch. i turned tail and met them in cafe kick, where we remained until it's midnight close having a real good natter. the queue for james holden wasn't that long, but it was static. we waited in it for a while, weighing up our options. jo went off to do some recconaissance or something; she came back explaining that the passout system was a pentagram drawn on the hand. jo then decided to try and get in, which she appeared to do as we got a phone call from her. andrew and i joined the re-entry queue but couldn't figure out how she'd managed to skip both this queue and the normal one. we figured it must have had something to do with cheating. we couldn't bring ourselves to follow her and brought her out. we went to the offy and got the bus home, borrowing a bottle-opening technique from the man sat behind us. drinking on the bus really felt rebellious. we got back to jo's and she djed and tried on dresses, while andy and i talked about stuff she wasn't interested in.

the morning after, andrew and i reloaded the car, then drove up to jo's for a baked egg, crossaint and toast. i thought it was a frivilous detour on the way to the warehouse but it didn't last too long. driving in london really is a complete waste of time unless it's necessary. our journey was fine until we hit aldgate which appeared to have been closed, and we got to the warehouse after 12, a depressing three hours after i'd set the alarm for.
we recorded an album those two days, and squeezed a gig in. it took me until about thursday to recover. i won't go over the details, like i was going to, because i don't think they're intereseting anymore. the record will be it's own story.
the main point is we put down an album of songs we were sick of, and lost a bass player. we will now hide away to gestate and pupate, come up with a new nname, sound, and look, with our new bass player (alex out of kefranski - the rock family tree needs updating and is going to get wierder), and then have to play those old songs again.
one last feeling: rachel was away that weekend in kent. thought she'd leave us musos to it. i remember feeling on saturday night that rock was good, but would have been better if my girl had been there. that whole 'rock/sex' thing, y'know?
Posted by Unknown at 10/06/2008 10:30:00 am 1 comment: Links to this post