btw - did anyone notice how gillen wrote some of his best and most forward-looking articles ever, just before quitting games journalism? or is that just hindsight?
narrative via mafia 2
mechanic spoilers
torment (which is old, to be fair)
Posted by Unknown at 9/30/2010 10:20:00 pm No comments: Links to this post

firstly: fuck yahtzee crosshaw. i do love zero punctuation, in spite of the laddish overtones, in spite of the air of negativity, but saying "Oh, apparently XKCD beat me to that joke. Well done, you smug cunt, now learn to draw." on twitter is unforgivable. xkcd can draw you schmuck: 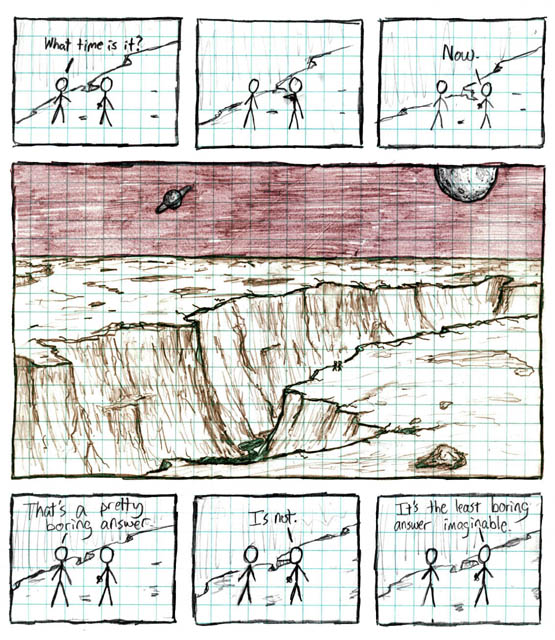 calling someone a 'smug cunt' because they said the same thing as you, but earlier? that just makes you the same smug cunt, but later.

it's more of a game-changer than he let's on. he's the most cross-cultural of any games writer i know. but anyway.

i want to write about game difficulty, and save games.

i think save games have ruined computer games. and i think the two things are inextricably linked.

crosshaw was saying that games should have difficulty levels that are adjustable on the fly. i can think of a few games that have done this, none of which he cited.
the earliest was dark forces. complete a level on any difficulty setting, and you unlock the level for future play on any other difficulty setting, earning a bronze, silver, or gold medal (if memory serves me right). these days, getting all silver or gold would unlock goodies, but back in the day, it was it's own reward. each level was thus, in the doom tradition, a stand-alone experience.

thief had a similar thing: at the start of each level, choose your difficulty. however, it would have really benefited from the same 'replay' feature.

the other game i know of which adjustable difficulty was sw:kotor. this let you change up instantly - since it was a D20-system based game, adjusting the difficulty simply meant adjusting the odds stacked against you. this is the most brilliant way to affect the difficulty, but only applies to random-chance based games. incidentally, playing it through on easy meant i never had to engage with the card game or drag racing mechanics of the game, because i didn't need the extra cash to buy the extra healing packs and armour i would have needed, so despite the convenience, it did affect the story arc of the game. i spent less time investing in my characters.

the other thing is save games.
let me tell you about doom. again.
doom is a game that works whether you play it through or you play it as a series of puzzles. i still relish what i call the 50-bullet challenge: start any doom level with a pistol and complete it. any good doom map should be do-able like this: the second weapon should be able to be acquired before you run out of ammo/health with the first one, and so on. the latest and otherwise best iteration of the doom engine, skulltag, has completely missed the point of this craft of level building, and if you die, you restart the level with what you had when you joined. the level becomes a save point, not an experience.

i think this is tragic. often you'll finish a doom level with a good supply of weapons that you've just built up, but physically in tatters. hitting the exit button, or falling into the final teleporter, should be a massive relief. having the opportunity to reset yourself, get 100% health back, but have to work up a new arsenal, is how i've always felt the game should be played. and they've removed that key mechanic.

but the problem here is just an extension of the increasing tendency to let people save wherever they like. it's not good for games. it turns people like me pathological - i might complete a sequence of an action game having taken a couple of hits, and then, terrified that this will put me in an impossible situation in a few rooms time, where i don't have enough health to simply survive, i feel the need to load, and redo the section perfectly. x-com: terror from the deep was ruined by missions so long that without saving and loading, all your people would die from simple exposure to statistics. which ruins the game: the time i've wasted taking a risky shot again and again until it hits home...

then i played doom: the rogue like. saving here is reserved entirely for quitting the game and coming back to it. there's no other way to load. it solves all the problems i had with thief, which are:
1: running round a corner, getting caught, then loading and sneaking round it to black jack the guard (which is basically using the save game as some sort of psychic power)
2: not being able to play the game again, since most of the fun is in exploring the level for the first time.

not being able to save would have made me actually invest in my actions. yeah, i got caught by a guard; i had to deal with it, rather than just loading from a few seconds earlier so i could get a better score at the end. it turns players into habitual f6ers, who can't stand to lose any health at all, in pursuit of the perfect run. it becomes an obsession, and it can be fixed by regular 'forgiveness' points, where the player gets back everything they need. a level should be an evening's entertainment, able to be played through in one sitting, easy enough to beat, tough enough that the player has to invest their skills in it and use up some of those special items they're hoarding.

and then random layouts are brilliant. the challenge is now not to memorise what's around the next corner and pretend to react to it, but in actually playing skilfully. i wish dead rising had had random layouts to the shopping mall - dead rising, the roguelike would be amazing. it also handled save games fantastically, but i can't be bothered to write about that anymore.

oh yeah, and planescape:torment re-invented saving and loading with the whole immortal character thing, but then your companions kept dying, so it kind of worked out the same. but enough said about that game, which is brilliant.

justification:
over the last few years, all of my favourite 'loud' bands have tanked. most recent albums from 'such luminaries' (wevertf that means) as the locust, dillinger escape plan, and ephel duath left me cold, so, so cold. so i'm going back now and looking at these others, and seeing if i can at least try and appreciate what they were trying to do, if not actually like the music.

I remember exactly where i was when i first heard ephel duath's 'the passage': at my dad's, playing with my half sister, listening to an earache records compilation, possibly 'extremity experiment' i'd picked up on the front of a magazine. dillinger escape plan's 'monticello' from their first e.p. had just been on, which had slightly disappointed me; and then there was this quiet guitar intro, awkward harmonies and timing, and then that eruption of distortion and hot trumpet playing, seguing into break-metal paradise: it was the song i had always wanted to hear. I got hold of the album, 'the painter's pallette', as quick as i could; it did exactly what an album with 'the passage' as an opening track should have done. and with every album, they were doing something entirely different, with a swiftly rotating line up.

[well not really rotating; they started as a synthonic black metal two piece; one left, and davide tiso got in a full band: drum, bass, two vocalists, plus guest electronics and trumpet/trombone. clean vocalist left and was not replaced; bassist left and was not replaced; drummers came and went. when the growly vocalist finally quit after 'through my dog's eyes', davide packed the band in. he started playing with karyn crisis, and formed another 2-piece (parched) who recorded an album of ambient guitar.]

so after the painter's pallette, came the immensely satisfying and progressive 'pain necessary to know' and it's companion record 'pain remixes the known'. then: 'through my dog's eyes', which i have listened to all the way through maybe only twice.

it's a bluesy, grungey mess of an album that doesn't have any memorable parts until the the third act opener, 'guardian'. 'pain...' was a very difficult album, with very few discernible riffs, but what makes it a difficult, labyrinthine listen at first is what made it eventually become in my top two favourite albums of all time, alongside gorky's' 'bwyd time'. while '...dog's eyes' also feels riff-free, but not in a good way; just clanging chords without respite or much dynamic range.

rather than the usual lyrical approach of opaque mystery (one t-shirt proclaimed the passage's refrain, "are you coming to poison my remarks?"), 'dog's eyes' takes its subject matter, as the title suggests from davide tiso's beloved hound, who added insult to injury by dying soon after the release of the album, adding to his personal crisis with record companies and loss of his band, culminating in his moving from italy to america. so the album has some quite legible sequences, all from the dog's perspective: "i'm wagging my tail so hard, my whole body seems to be dancing; I wonder if he knows i'm trying to imitate his face?". it's certainly brave... but... like the rest of the record it kind of falls flat, a directionless, uncaptivating ramble. you can't tell where one song stops and the other starts, and not in a good way. i think that kind of sums up the album; all the things that are usually so great about the duath fall flat here. there doesn't seem to be any substance beneath the noise. every so often, a vocal refrain or hook might emerge, but the underlying guitars just carry on with their detuned sludgery. maybe part of the problem is the huge number of guitar overdubs here - there are so many guitar sounds at any one time - slide guitar, various shades of distortion and chorus-clean, at any one time. other than this army of overdubs, one track has a wierd sax improv, another has synths added, and the finale has glitchy drums courtesy of dillinger escape plan's ben wienman. there's a nice mellow moment - very reminiscent of later work with parched - at the start of spider shaped leaves, which should probably have been plonked halfway through the record rather than towards the end.

davide tiso always hated the 'jazz-metal' label that was attached to his band, but at least it was somewhat accurate. but there's no jazz here, and i use the term jazz very loosely indeed, basically as far as including everything interesting. listening to this again as i write this up, i have been getting more out of it, but it's a struggle. it's hard to dis such a brave musician, but i still just don't find the music on this one interesting. there seems to be too much going on, and also at the same time, not enough really happening.

despite this, the recent announcement that tiso is forming a new one-man band (makes me wonder why he doesn't stick with the ephel duath moniker, since he's now the sole member, or his davide tiso moniker that he went under on the 'better undead than alive 2' compilation) called manuscripts don't burn, out of studio outtakes from his sessions with karyn crisis, is great news. he's even gone all twittery to promote it.
Posted by Unknown at 9/15/2010 09:52:00 pm No comments: Links to this post