i'm not the murdoch press

i notice that yesterday i posted two anti-beeb links. firstly i should point out an error - the bbc issued a cease and desist only when 'someone tried to sell one of her patterns on eBay'.

now, i like the bbc. i have a fondness for auntie in the same way i love the labour party. that is, sometimes relations can become fairly strained. obviously right now labour are a detestable pack of mad yapping hounds who deserve everything they got in the local elections and i want my labour party back. things can get similar with the bbc; there's only so long you can apologise, so long before some murdoch-funded columnist actually makes a fair criticism in amongst the litanies of hate.
so whereas i love the idea of a media corporation that does not advertise and thus cannot be said to be producing material just to keep people in front of the telly for as long as possible - actually that's not a very good point, since their licence fee does basically depend on how much is consumed, but at least it's a direct link, not through a third party business buying ad space - just as i love the idea of a political party that fights for workers rights against the wealthy landowners, sometimes you want to love something more than you actually love it.

how dare the bbc claim copyright on something that they claim just ripped straight out of lovecraft/futurama? this _screams_ public domain. 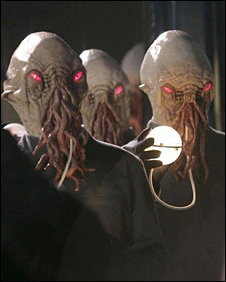 anyway, the bbc are a public corporation and if she pays her license fee, why the hell should she not feel entitled to make bbc knitted toys...
Posted by Unknown at 5/14/2008 12:11:00 pm 1 comment: Links to this post

Conductor Daniel Barenboim on his hopes for peace in the Middle East | World news | The Guardian: "The story of my maternal grandparents, however, is a very special one. When they arrived in the harbour of Buenos Aires (he was 16, she 14) after the miserably long trip, it was announced that only families would be allowed to disembark; the quota for all others had been exhausted. They were both alone, and my grandfather said to my grandmother, 'Let's get married!' And they did. Once on land, they went their separate ways. After two or three years they met again by coincidence, fell in love and spent the rest of their lives with one another."
Posted by Unknown at 5/14/2008 11:52:00 am No comments: Links to this post

BBC to drop BBC Parliament service for Olympics | Media | guardian.co.uk
this is the last straw, this is. as if the olympics weren't offensive enough in terms of the ridiculous cost, the lies told to bring it to this country, the money being diverted from actual neighbourhood sport schemes to put on this pimping parade of nonsense, and the fact that it's to do with sport, now they're going to take off the parliament channel, so if you want to escape by watching repeats of classic general election coverage (since parliament will be in recess at the time), you can't. thanks, olympics.
Posted by Unknown at 5/14/2008 09:49:00 am No comments: Links to this post

what brand of facial cleaner dose robert mugabe use?