the week in media

i thought, fuck it, i've got enough links to do a rockpapershotgun.com-style sunday papers read once a week. it'll save all those hideous link-tweets and actually get me commenting on stuff i'm reading.

excellent article on how impossible touring is if you're a jobbing band, especially when you're 10 years down the road and you've got a life.

i was investigating midi-chlorians out of star wars, in an effort to understand quite what lucas was thinking, and see how quickly they were dropped (they're only mentioned in one official source, you know). i came across something much more fascinating: midichloria mitochondrii, a bacteria that infects mitochondria in ovaries of a species of tick. so you've got a parasite of a organelle of a cell of an organ in a parasite of mammals. is that not completely brilliant?

florence is always brilliant, but i particularly loved this weeks article on how to host a board games night. sample quote:

You visit each of your friends’ homes in succession. And you kill them all, in a board game style.

Friend 1: you roll dice down his throat until his stomach ruptures.

Friend 2: You hack him up and bury his parts in two shallow graves, one marked “Draw Grave” and one marked “Discard Pile.”

Friend 3: You strip him, cover him in wool and take him to an abattoir. You find the conveyor belt carrying lambs to the slaughter and swap him in for one of the animals. You watch as he is killed and hung, having successfully traded him for sheep.

Friend 4: You throw him into an incredibly elaborate and enormous Dice Tower you’ve built, letting his body tumble to the bottom, his bones smashing in a satisfyingly random manner.

the kermode uncut blog is always great - kermode responding to comments, setting homeworks, and being even more of a personality than his review show allows. he's recently started doing 'instant reactions': his thoughts outside the cinema immediately before and after seeing a film. here's his reaction to aronovsky's next film, the black swan. based on this, i cannot wait for this film, despite only having missed everything by aronovsky except pi (which, despite it's bollocks maths, i loved). dr k's reaction "i don't know whether it's good or bad, but it's certainly interesting" is so... me. gillen once said of his own work "i don't know whether it's good, but i know that is clever" which was a bit self-indulgent, but let me tell you this: i'd rather be 'interesting' than 'good'. but, oh, to be both...

the news in me:

continuing my self-indulgent cultural theft of history, i'm re-releasing my 'cloaca' ep from 2003:

it's andrew's birthday this weekend, and so here's a happy birthday andrew mix:

10 - Andrew Gardiner Is 29 by Dj Gallowslutt on Mixcloud

this is the same pattern as anyone good, isn't it? so celebrate their heydays; forgive them for wanting to keep making films/books/albums when they've lost their way; find the new heroes.
co-incidentally, i'm rereleasing my 'heyday' on www.totheboats.bandcamp.com. next month: cloaca.
Posted by Unknown at 10/29/2010 10:45:00 pm No comments: Links to this post

so, this summer, we went up to stay in seahouses for two weeks, hoping to see otters.

seahouses, in northumberland, has a unique smell; a mixture of harbour (a smell slightly different to just 'the seaside', harbours have their own slightly-off smell of rancid seawater), coal fire (every cottage was black with soot) and chips. three smells i've never experienced in the same place. it's a very handy little village - not quite a town - for a couple without a car. there's loads to do (although we missed the farn islands breeding season by a week), well when i say loads, i mean, that's considering we wanted to do nothing.

so we went on an otter safari one day, which was a lovely jaunt around various locales and haunts. otters are making a big come back, spreading down from scotland and already making a nuisance of themselves, wiping out whole areas of wildlife rather than spreading themselves thinly and letting the indigenous fish and ducks recover. so we traipsed over hill and around reservoir, but to no avail; we saw plenty of fine sea-birds, waders, lots of gorgeousness, but no otters. our excellent, knowledgeable guide gave us a few more tips, but the trail seemed to be cold.

I wasn't going to let it stop us. at the national sheep dog trials at alnwick castle, I found the local wildlife charity stand and put the question to them: where can i see some otters? they wittered a little, but gave me some very good advice; there's a hand-reared wild-living couple at eyemouth, just over the border past berwick, who are very easy to get to see, but that was a bit far for us... but they also mentioned the river till, between ford and etal, was an easy drive from seahouses (rachel's mum would be coming up with her car the second week), where they themselves had seen an otter previously.

I got really excited about this. I went and bought a map: 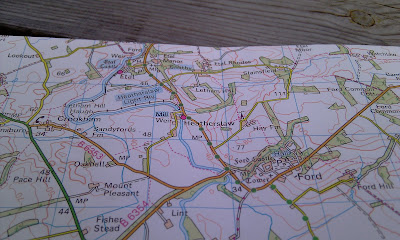 look at that river. have you ever seen a more otter friendly river - the straight bit, the curve... imagine the river banks! i got very excited.

so i convinced pam to drive us over there for a picnic towards the end of the holiday; it was the last chance for otters. we got there mid afternoon and began exploring; it turns out there's a miniture railway between henslaw and etal, operating out of a disused mill. a mill! with a water wheel! what could be more ottery? it was fairly late by the time we settled down, laying picnic materials out on the river bank in a cowy field; in feverish restlessness i tracked the river down to ford alone. it looked perfect; quiet, plenty of bracken and undisturbed river banks, exposed roots for otter holts, everything you'd need. but no otters. at the bridge at ford, there were canoeists and private fishing, enough to make me turn around and trek back.

at the end of the day, i decided that i alone would walk up the river in the other direction, and meet rachel and pam at the pub in etal.

View otter hunting in a larger map
you can see the diversion i had to take, due to the dominance of footpaths; the footpaths there were, were in terrible shape, and the path to the main road was only the begining. as i got into crookham, a man with a dog noticed my 'i heart otters' badge and seemed to get the measure of me.

here's the rub: he saw an otter, at exactly this bend on the river, yesterday. a month earlier, he'd seen a couple (probably a mum and pup). but he couldn't let me go down the footpath incidated on the map that led exactly to the curve of the river because a) he owned the land, and b) the footpaths were overgrown and inaccessible.

could both those be true? or do i remember it wrong? nevertheless, even though i didn't see any otters, i had found exactly the spot i was looking for, through a combination of careful questioning, dress, and map-reading ability. the latter is not something i'm known for, but i just knew that the area looked perfect for otters, just from the map. the wildlife folks pointed it out, sure, but if it hadn't looked so perfect, i wouldn't have followed it up.

so anyway, the landowner (such as he was) advised me to take the next path onto the river, which is what i did, hence is indicated by the blue line. the path along the river here was still massively overgrown, and it took me four times as long to reach etal as i'd estimated. i got some views of the dramatic meander below etal, and i've never seen such a calm river, such a high bank, such a poorly walked path... i was furious about the upkeep of the riverside path, and considered writing to the countryside agency about it, but if it were more used, would the otters flee?
shit i had to walk through: 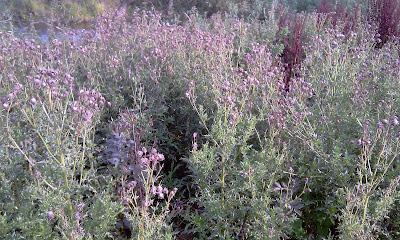 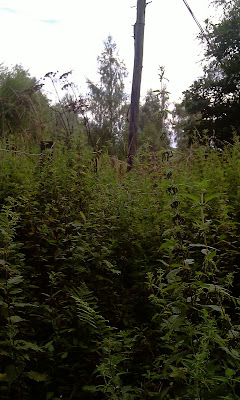 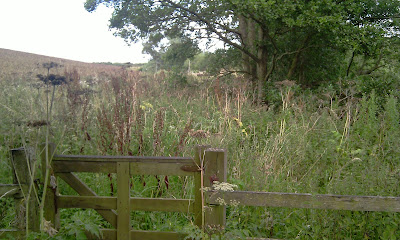 anyway, ultimately, after many phone calls back and forth about my lateness, i found myself across the river from etal, and discovered that there was no bridge as such; there was a shallow weir, and no dry way across, since the stone thing there, some sort of dam, had broken through. 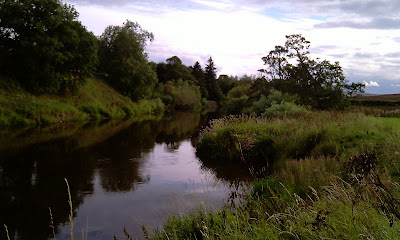 (looking back down the river till)

(the crossing to etal)
and so, i wandered into the bull at etal, damp, barefoot, and otterless, looking for a pair of ladies. it had been a good jaunt, and worth it. we'll get them next time.
Posted by Unknown at 10/16/2010 03:02:00 pm No comments: Links to this post